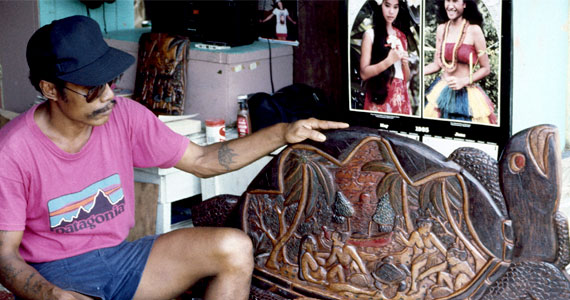 A Palauan Prisoner and Storyboard Carver, 1985

Let?s take a look at the ?crime and punishment? issue from a different point of view.? In an island society–or in backwoods hill country US–it is important to keep the peace.? Otherwise, the Hatfields start taking shots at the McCoys, or the people of one village begin slinging spears at those of another, for some real or imagined damage sustained.? To heal this rupture in the society, there has to be some compensation or pay-back for damage done.? Chuukese, and people from other islands also, sometimes adopted the young man who had killed their own son.? The killer was the payback to the offended family.? At first I found this hard to believe, but then it began to make sense. ?The adopted son has the same obligations to the family that the dead son would have had.? Besides, it unites the two families, that of the offender and the victim, forever.? Nice, isn?t it?? This ?strange? island system? provides for both the victim and the offender, while restoring the peace.

In Chuuk, where I used to do chaplaincy work in the jail from time to time, the Catholic prisoners would come to mass each month.? They sang loudly at church services and really did read the bibles in their cells.? But then, too, they had made their peace with the families they had hurt.? Their time in prison was to satisfy the demands of the court system.? After all, we have to lock up offenders for a time, if only to show everyone out there that it?s not okay to stab someone, even if both of you were drunk at the time.

My one experience hearing confessions and saying mass in the Palau jail had the same feel to it.? There may have been people in jail who had done terrible things, but there was no cause for fear that they would repeat the same crimes when they got out of jail. Recidivism in the islands was a problem for two kinds of people: the druggies (a problem once big in Palau but never in Chuuk) who would go to any length to satisfy their addiction, and the petty thieves and the harmless kooks who kept doing stupid little things and getting caught.

I well understand that all this gets much more complicated when we try to apply it to large societies like the US.? But that?doesn’t?mean that we should stop trying to do so, while instead settling for a justice system that is satisfied with getting the bad boys out of the way for as long as the law allows.? It’s self-defeating to fall back on the single answer that everyone seems to accept these days: Toss the criminal in the clink for a set number of years so that he can repay his debt to society.

A good Jesuit friend of mine, a former chaplain at Ryker’s Island, keeps reminding me that the incarceration rate in the US is the highest in the world.? In 1970 there were 400,000 Americans in jail.? Today, 40 years later, there are 2.4 million behind bars?six times as many.? He?s right when he suggests that there?s something wrong there.

What do we do?

First, acknowledge that the first concern should be the victim.? If the victim has been injured,?shouldn’t?the wrongdoer take some hand in repairing the damage, even if all he can do is apologize?? Might the length of his jail sentence depend, at least to some extent, on his readiness to help the family he has hurt?? I know of instances of men convicted for vehicular homicide on Guam who have been given the opportunity to do this and were grateful for it, not just because it shortened their sentence but because they had a chance to acknowledge their guilt toward the victim?s family.? For those who insist that long jail sentences are necessary to deter others from drunk driving, let me remind them that cutting off the arms of young thieves in 18th century Britain?didn’t?succeed in ridding the streets of pickpockets.

Second, remember that the offender has a life, too. ?Doesn’t?it make sense to try to salvage that life rather than compensate for one act of destruction with another?? Someone once said that a society that rigorously applies the ?eye for an eye? rule will be a land of the blind.? Naturally, there are certain kinds of people?those inclined to criminal violence?whom you might prefer not to meet during your evening jog in Central Park.? By all means, turn the latchkey on these types.? But first take the trouble to find out who constitutes a threat to humanity and who?doesn’t.? And don?t waste the lives of those who can be rehabilitated just to teach others a lesson.? Rod Blagojevich may be a poor excuse for an elected political leader and an avaricious scoundrel, but is 14 years in jail the best way to deal with this?? After all, Roskolnikov, the main character in ?Crime and Punishment,? only got 11 years for the premeditated murder of an old woman.

Third, use punishment when you must, by all means, but use it with discrimination. There has always been a place for punishment in the human family and community. Some people (not just the criminally insane, either) should land in jail, but we should be clear on why they are there.? Perhaps because they pose a threat to the people outside. Perhaps because they show no willingness to compensate the victim or even readiness to believe they did something wrong. Perhaps to teach them and everyone else a lesson.? But please spare us the old bromide: ?To pay their just debt to society.?? Society would be satisfied if they would just turn their lives around.

Sounds pollyannish, I suppose.? But I always thought that the American genius was to begin with ideals and translate them into systems that worked.? So, let this be our challenge.