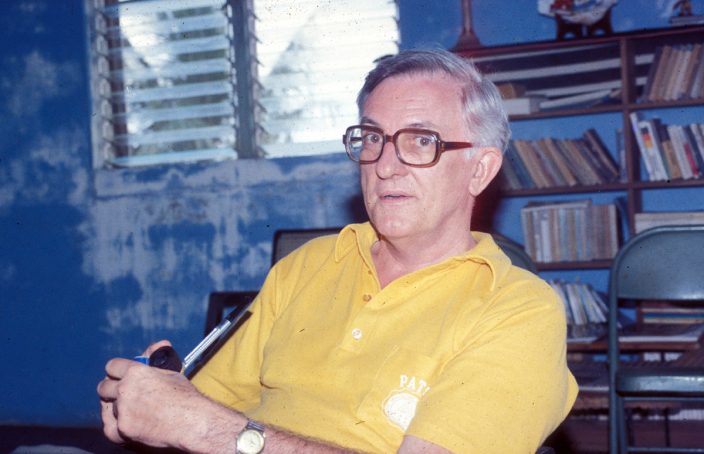 Finally, on December 29, we received the news that we long anticipated but dreaded: Fr. Bill McGarry died at the age of 90 in the Jesuit infirmary in Manila. The man who more than anyone else had shaped the course of the modern Jesuit mission in Micronesia had left us. The uncrowned (and unmitred) head of our Jesuit band of brothers had passed away.

Bill was born and raised in Brooklyn, but he attended Xavier High School (the Manhattan version, of course) along with just about every other Jesuit who served on Pohnpei?Hugh Costigan, Joe Cavanagh, Jack Curran and Dick Becker for starters.

My own first meeting with him occurred in 1958 when Fr. Marty Neylon, then our Master of Novices, brought three of us to New York to attend his first solemn high mass. As a Buffalo boy on my first visit to the city, I remember being mesmerized by the skyscrapers of the city. None of us at the time had the slightest suspicion how closely our lives would interact in the years to come. Two years later, Bill was assigned to Micronesia, where he immediately went to Wene to replace Fr. Quirino, a Spanish Jesuit, who had just drowned in a boating accident. Just ten years later, Marty Neylon joined the mission and was soon afterward made bishop, eventually replacing Vincent Kennally. (I slipped into the mix as a scholastic assigned to Xavier in 1963.) 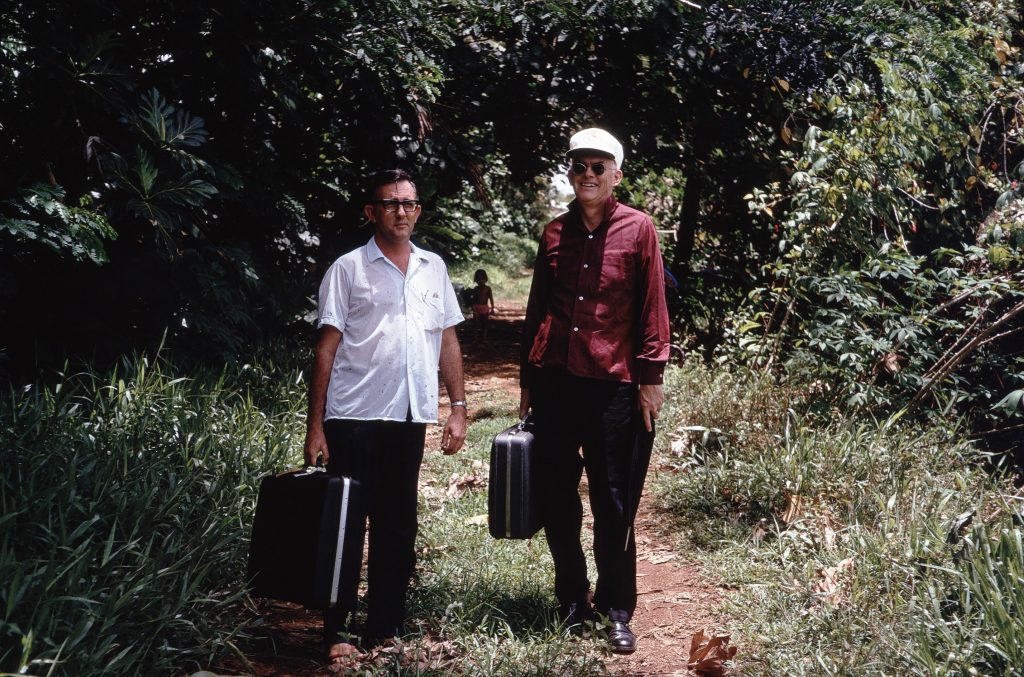 Fr. William McGarry on a path with Bishop Martin Neylon, 1970

Bill McGarry, we soon found out, did nothing by half measures. He learned the language and culture of Pohnpei with a thoroughness that the rest of us could only admire. Before long his reputation soon began circulating throughout the island among foreigners and local people alike. If a young Pohnpeian wanted to know some obscure respect term used only of high chiefs, off to Bill McGarry he would go. 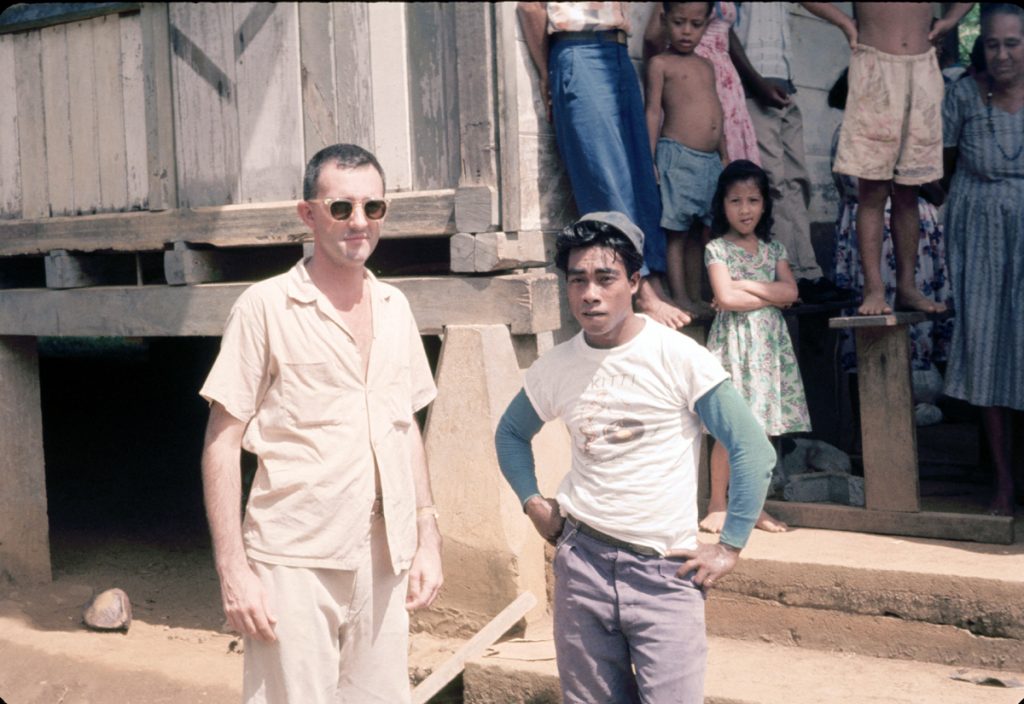 Father Bill McGarry, SJ, with a local family in local Pohnpei family, circa 1960 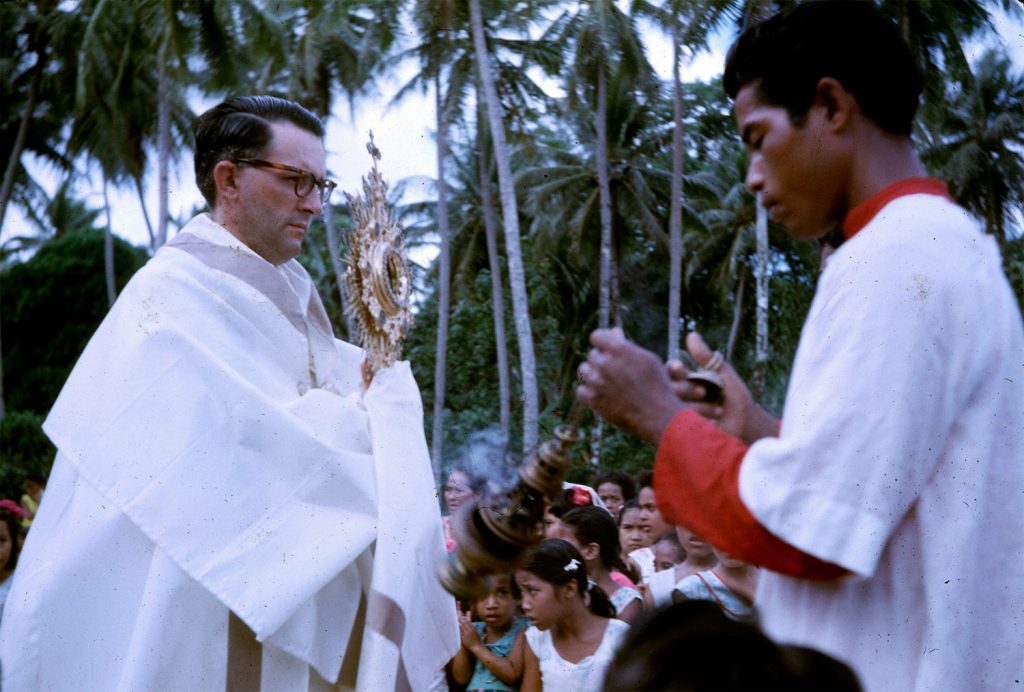 Bill?s knowledge of Pohnpeian culture might have been unsurpassed, but not his culinary skills. My first visit to Wene in 1965 convinced me that if I wanted to eat something more substantial than tinned black bread, I might have to fend for myself. So, with a rifle borrowed from a Xavier student, I shot two pigeons that became our dinner. Fine dining was simply not a priority for the pastor of Wene. 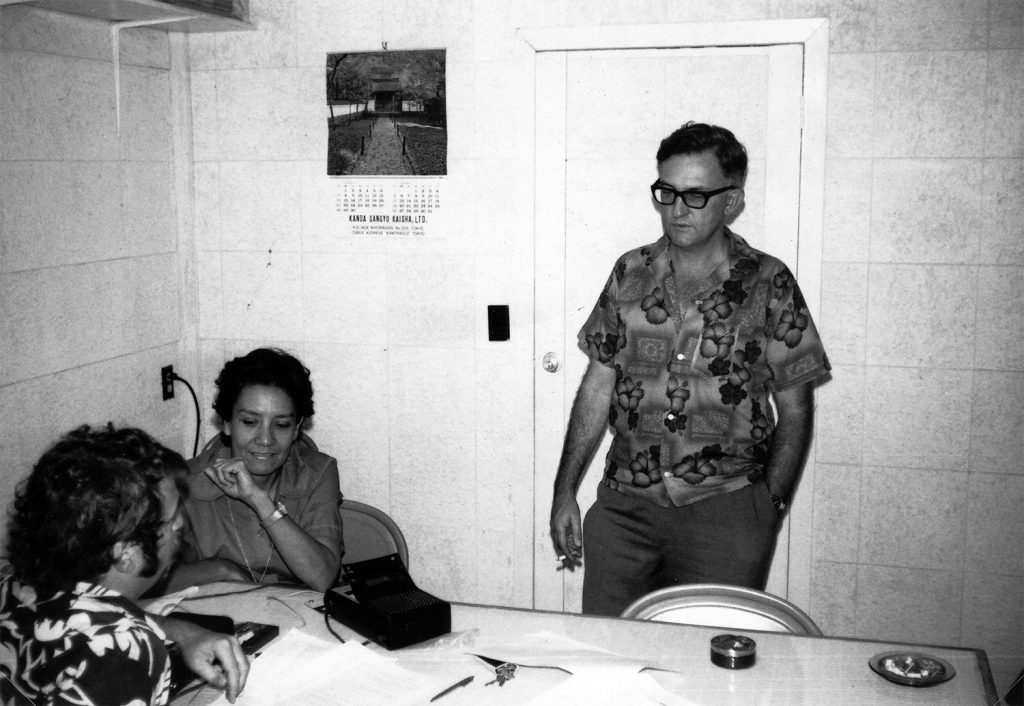 Still, Bill served as a remarkable mentor, not just for me but for virtually every young Jesuit who was assigned to the islands. With his keen understanding of the culture and his Irish penchant for conversation, he was ideally suited for this task. Cigarette in hand, Bill could expound at length on just about anything, it seemed, but always in a way that made us youngsters feel comfortable. 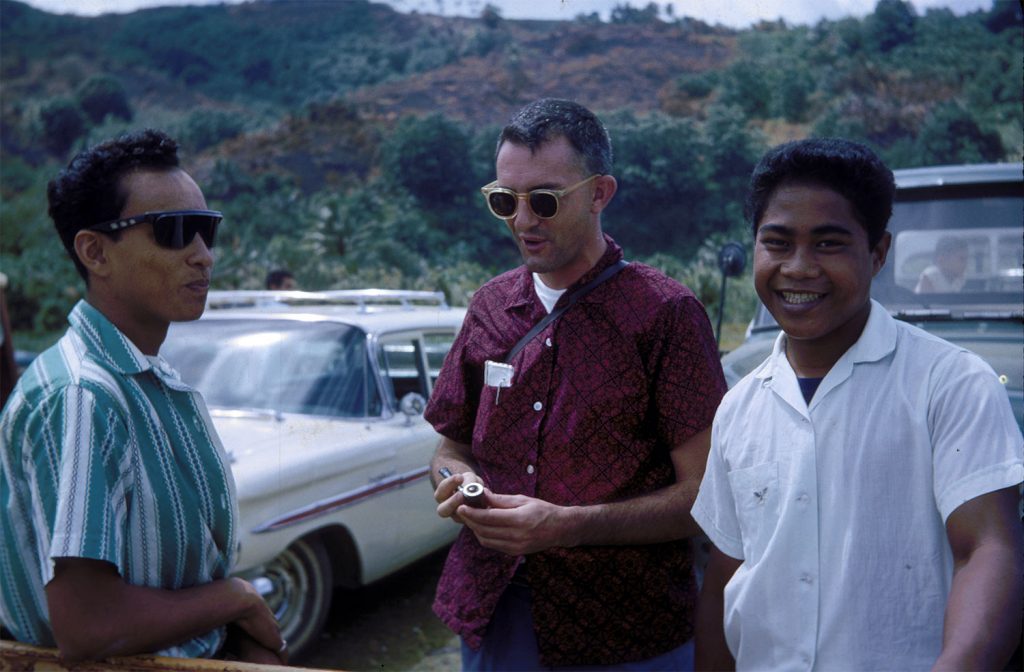 Fr.Bill McGarry in Pohnpei with William Epiriom and Daka Alphons, 1965.

More than anyone else, Bill McGarry saw the importance of the Second Vatican Council and its relevance in assisting us to define more clearly our mission in the islands. It was he who insistently pushed for periodic meetings of Jesuits to spell out this mission and to decide whether new apostolates might be needed to accomplish this mission.

Under his influence the mission was transformed from a collection of individuals, each following his own star, to something that could almost be called a team. As for those meetings he pushed, the first and only all-Jesuit gathering was held in August 1968. Later ones expanded to include sisters, diocesan priests and lay representatives, not just to continue the planning process but also to provide theological updating for all at a critical time in church history. The vision Bill promoted was of a church that was fully indigenized?one for islanders and staffed by local priests. The diaconate program begun in the early 1970s on Pohnpei was his creation, as were some of the liturgical changes that occurred during those years. 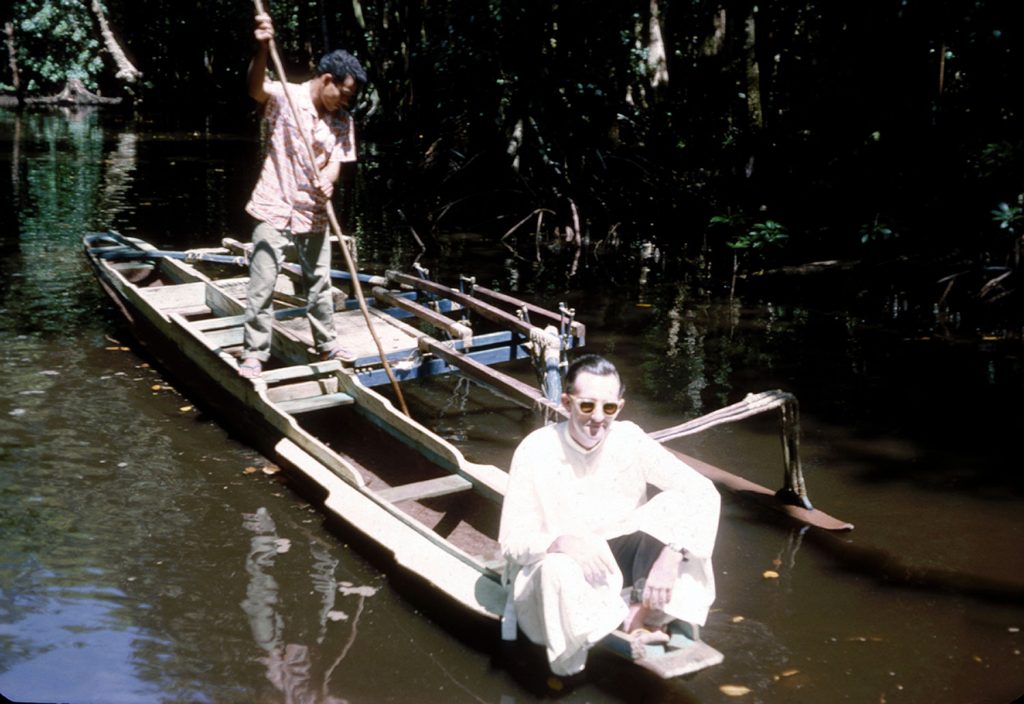 As these gatherings continued through the years, we Jesuits found ourselves increasingly linked to the East Asian Conference?so? much so that we forced a name change to include the term ?Oceania? in the title. Overall, the Conference proved to be a valuable resource pool for our own ventures into media, education and theology. Bill himself served in the Philippines for two stints?in the 1980s as head of the Conference office, and then in the following decade as the first superior of Arrupe House of Studies. He had made so many friends in the Philippines during these assignments that when Bill finally retired in the Philippines about ten years ago, it was almost like going home.

Bill McGarry served officially as mission superior for seven years (1973-1980), but the actual leadership he provided in Micronesia extended far beyond this. Thanks to his close working relationship with Bishop Marty Neylon, Bill McGarry served as the guiding force behind the new directions the Micronesian mission was taking. Even today, under local Micronesian bishops, his legacy lives on.

Bill would be the last to call himself a visionary, so let me make that claim for him. We can all be thankful for what he has left behind in the islands that he lived in for so many years and loved so dearly. 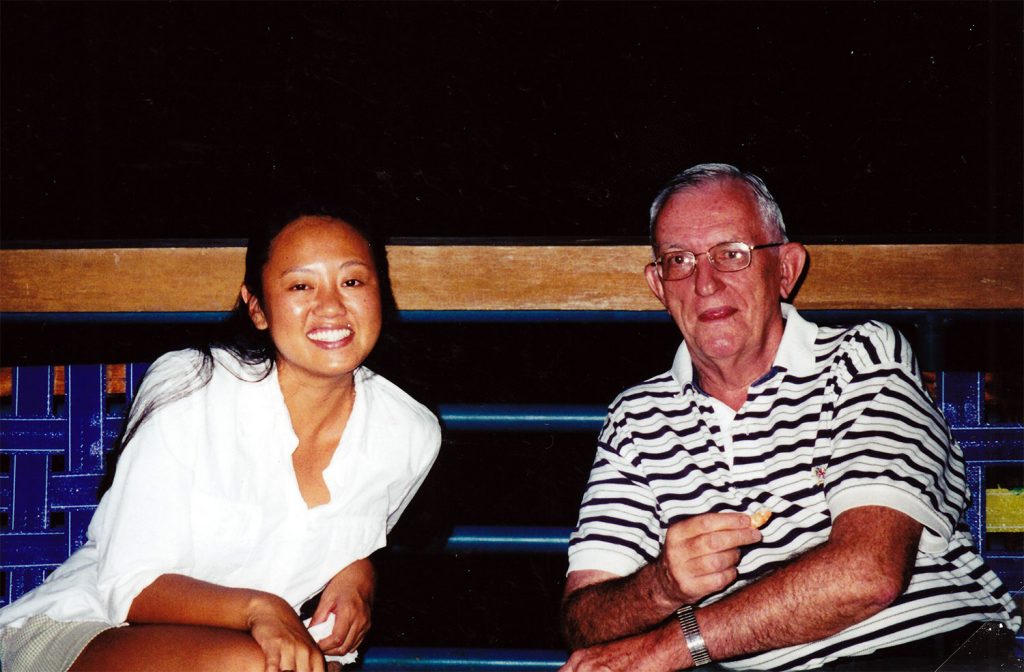 Father Bill McGarry, SJ, on the Jesuit porch in Kolonia with Catherine Aubuchon, circa 2000. 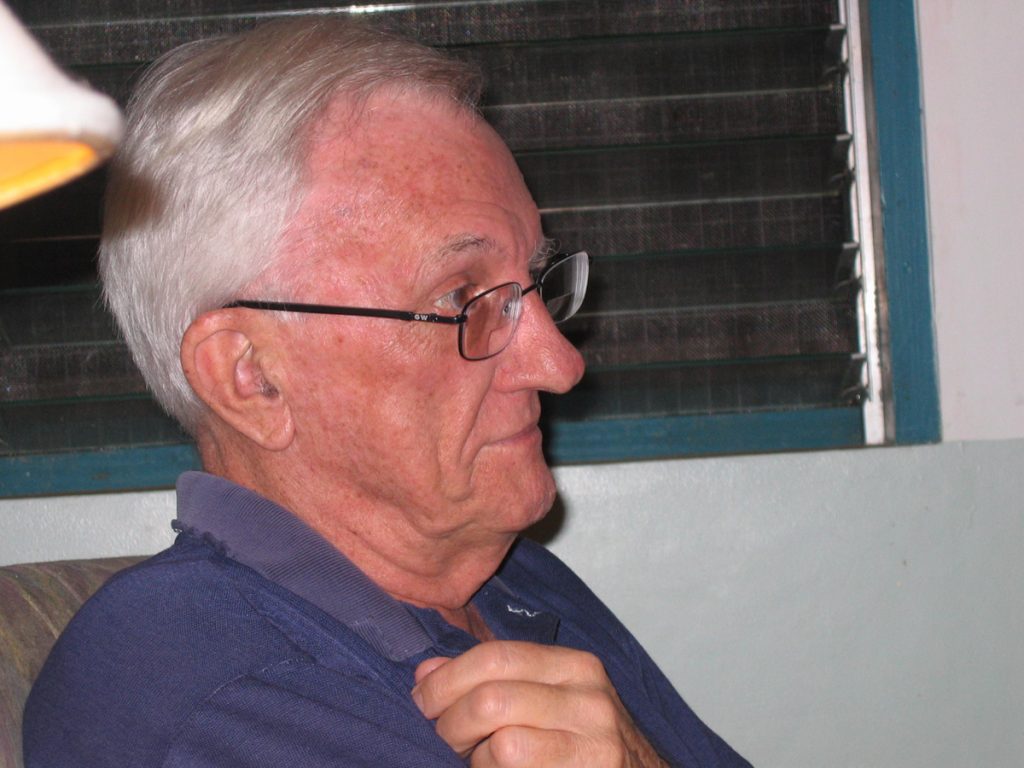 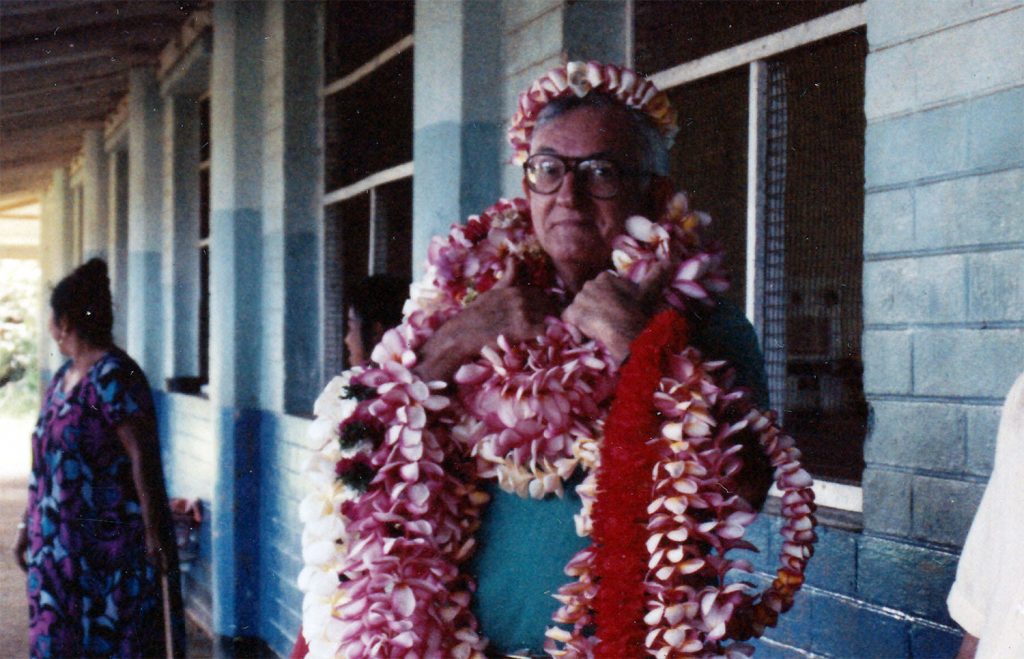 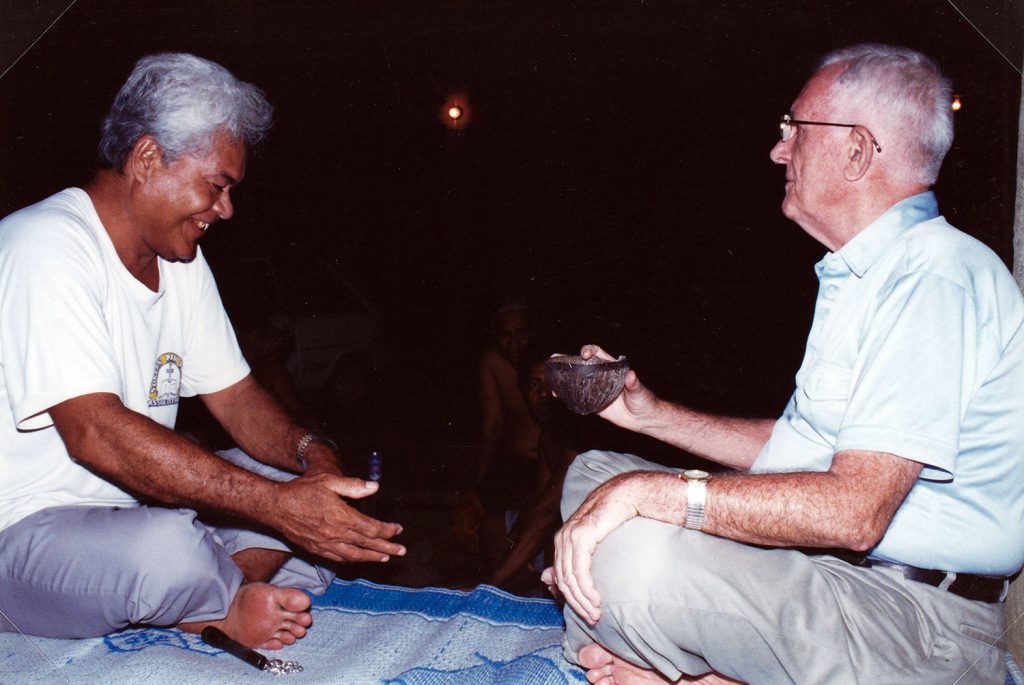 Back to School Retreats in Dededo and Palau

Meet the New Bishop in the Carolines: Julio Angkel