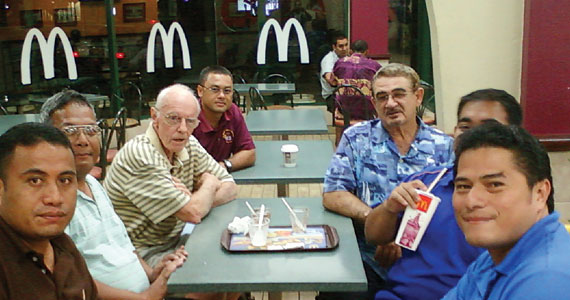 (from left to right around the table): Anthony, Fr. Edmond Ludwig, myself, Dominic Teodor, Dave Antonelli, Jaynick Engichy (half hidden with drink in hand), and Jean Ives (seminarian from Wallis Is). Missing is Joe Baranabas from Pohnpei, who was taking the photo.

Getting up at 5:30 in the morning to catch an 8 AM flight was the easiest part of the trip from Honolulu to Fiji.? Plenty of time to make it to the departure area, I foolishly thought. Then reality set in. The hour and a half wait to check in and work my way through security left me with about ten minutes to run to the gate before the final call for departure on Air Pacific. But the final call was anything but that, since we waited close to an hour and a half before the plane finally lifted off.

But then there was the boon of being seated between Fred Muller, a former student and now the Marshallese Ambassador to Fiji, and Ann Singeo, an old friend from Palau who was en route to a conference in Nadi. That led to five hours of good conversation, a short snooze in mid-flight, and an occasional page or two of the novel I was carrying. When we stopped at Apia, Samoa, to let off passengers and a cabin check, it was clear to us that good old Air Mic could teach a thing or two to our cousins from below the equator on how to organize a security check of a plane in transit. Barely had we cleared security at Apia than we were told it was time to board the plane again. What was the point? we wondered.

Upon landing at Fiji, I was told that my bag was, unfortunately, left behind in Honolulu but that I could call to find out if it had arrived on Monday, two days later, if I wished. I had always thought that it was the responsibility of the airline to get the bag to the passenger, possibly even giving the latter a few dollars for toiletries and a pair or two of underwear.? But no one suggested that possibility. So we dashed for the local flight to Suva, our destination, only to find out that we had to wait some more.? Meanwhile, security confiscated my cigarette lighter (which I had come to believe was no longer a life threat to other passengers, although it might be for me).

Checking into the hotel in Suva was a further exercise in frustration. My name?wasn’t?on the guest list since the conference organizers had me arriving two days later.? The Internet access card that I purchased?didn’t?work. Repeated phone calls to the Marshallese embassy to arrange for a pickup for dinner there failed. So I showered and got back into my old clothes, reminding me of my hygienic habits back in high school days, and walked to the Internet caf? to pick up email and check sports scores.

Was this just bad luck?? Does it really suggest that Micronesia is so much better organized than this place? Or is it just another case of an American sounding off about the ?locals? (these ?locals? happening to be in Fiji) as so many others have done in Micronesia? Am I just the latest version of the Ugly American?

The three day symposium ?What Can We Learn? that I came to Suva to attend drew some 30 participants, a good mix of Islanders and Palangi. The papers and the comments on them reflected many years of development efforts in the Pacific. Throughout the discussions we tried to identify what worked and what went wrong. My own paper was a review of the economies of the Pacific that asked why so few countries were able to support themselves without foreign aid. What went wrong?? Perhaps nothing was my conclusion.? It?s just that the expectations were unreasonably high. Other participants offered the same sad tales: agricultural projects that reaped richer benefits for local politicians than villagers, capacity building programs that never really did what they claimed, land reform programs that were virtually dead on arrival. ?Corruption? was a word that was often used, but ?cultural resistance? was the term that I would have employed.

Ben Graham and Carl Hacker, both from the Marshalls, were fellow Micronesian colleagues at the symposium. Carl Hacker, president of the College of the Marshall Islands, admitted one day in a break during the conference that he giggled every time I opened my mouth. Every time I spoke, he said he expected to hear something about US planes on a bombing raid during the World War II or whalers settling on an island somewhere. Why?? Because he is so used to hearing my voice on TV in the Marshalls, he told me. He said that they have playing the History of Micronesia video series non-stop on the local channel these days.? I?m willing to overlook the giggles if the old products are being shown regularly on TV.

The day after my arrival, I attended Sunday mass with our men at Pacific Regional Seminary. The singing at mass was extraordinary, and we all gathered for morning tea and a long conversation afterwards. Jaynick, Anthony, Dominic, Joseph and Dave, not to mention Fr. Edmond Ludwig, were generous in their donation of clothes (since my bag still had not arrived), so I returned to the hotel with a bag full of shorts and shirts. That evening the seven of us all got together again for dinner at a Chinese restaurant, with ice cream for dessert at the local MacDonald?s. It was wonderful to seem them all again.

Getting to Fiji might have been challenging, but the time there was rewarding. With the end of the school year in November, the seminary held graduation during my visit.? Arthur Leger, a fellow Jesuit, was also on island at the same time. I found that two of the participants in the symposium were ex-religious: John Roughan, a former Marist priest in the Solomons, and Cedric Saldahna, once Jesuit scholastic in India. My friends from the Marshalls and I gathered one evening for dinner and a long conversation about how schools could be improved there and in Chuuk. The week certainly ended much better than it began.

My Hot Homecoming: Return to MIcronesia

By the Time I Get to Phoenix…(as the song goes)

Catching Up with the Veterans