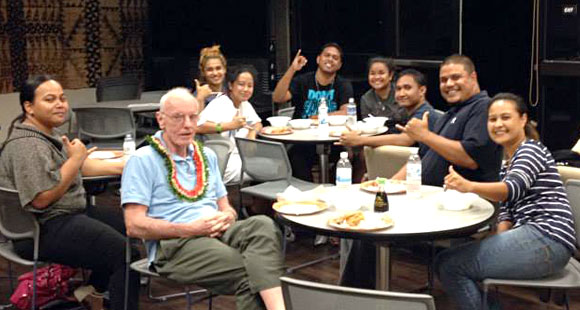 Visiting with recent Xavier alums on the Big Island.

As a fellow of East-West Center, I was given the opportunity to give talks?and do so much more?for two weeks in Honolulu and on the Big Island in mid-March. It all began with five presentations to classes in Ethnic Studies and Pacific Island Studies at the University of Hawaii. Why the ethic bias against Micronesians in Hawaii these days? How were Japanese migrants to Micronesia treated before the war? (Not too badly, if only because they were more numerous than the local people.) How about the treatment that Filipinos have received in recent years? (Not too badly either, even though they are a tiny fraction of the population.) What are five adjectives you would associate with ?Micronesians?? I asked at one of the classes.

One afternoon I spoke to a group of Micronesian students attending Chaminade College. We explored the weakness of the Micronesian economies, the forces driving islanders to emigrate, and how they were doing in their new countries. Many of these students were recent Xavier graduates. Afterwards, a few faculty members gathered to explore the cultural questions that arose again and again. What can we do to draw them out in class so they will contribute to the discussion? Why don?t they ever look me in the face when they?re talking to me?

One evening I accompanied Stephen Latimer, a lay church minister, to the Hawaii prison where he led the communion service while I talked with individual prisoners. If you haven?t been to a prison for a while, let me tell you that it?s a chilling experience. Oddly enough, it made me think of Xavier High School in its early years?drab, confining, tense. I spoke with five Chuukese and two Marshallese, all serving time for minor charges or waiting for their trial. Most of them might have been out in a month except that they could not afford bail. Meanwhile, they wait for the services of the busy Public Defenders since they can?t pay for their own lawyer, so the trial is further delayed until the Defender has a chance to prepare the case.

Another evening I spent an hour or two with people from a community organization in Palolo, a low-cost housing settlement just outside Honolulu. There Samoans and Chuukese and Pohnpeians face the common problem of how to provide for the family, not to mention pay the rent, on a minimum wage.

The feature of the week in Honolulu was supposed to be a presentation at East-West Center on the German era in Micronesia. The talk tried to show that colonialism is not the sum of all evils: in some cases, the colonized people as well as the colonial people profit from the experience. This is what I think happened in many (but not all) parts of Micronesia during those earliest years of the 20th century.

There was time to socialize with friends as well. Secretary of Foreign Affairs Lorin Robert joined us for dinner with Jason and Catherine Aubuchon and Steve and Fatima Savage one evening. (Here he is at table with Kevin O?Keefe and me.) 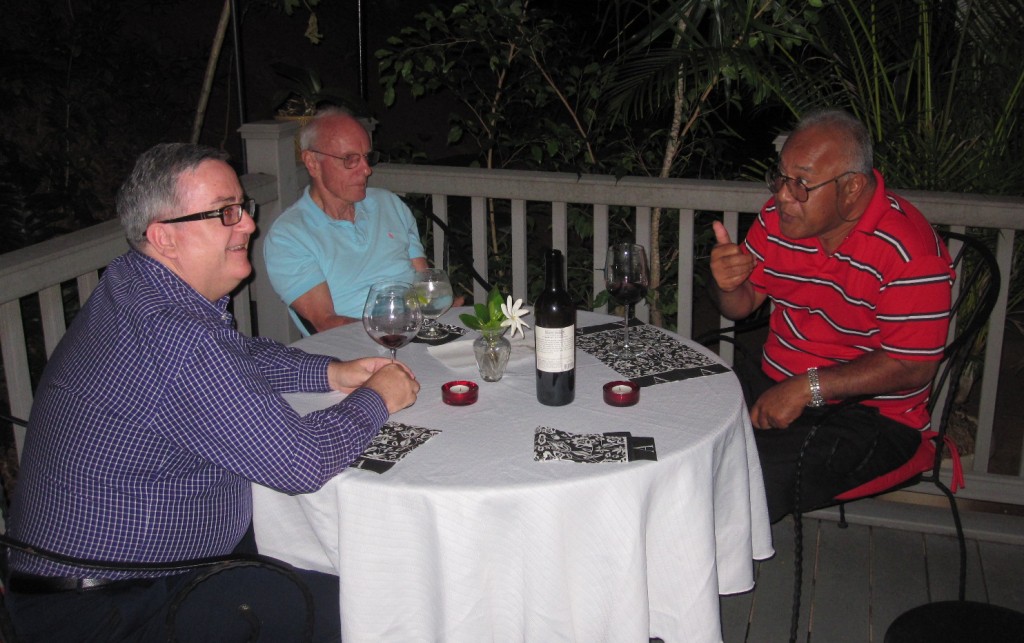 Dinner at Jason’s with Kevin O’Keefe, Lorin Robert and myself.

The following week on the Big Island offered still more opportunities for gatherings with old friends. There was this Sunday brunch with Vid Raatior and his guests, including Bill Sakovich, long-time swimming coach and more in Saipan, Max Yarawamai and his wife Cindy (Max is from Ulithi and runs a big landscaping business that employs dozens of islanders in Hilo), and Ed and Debbie Petteys (Ed has been a long-time friend who has contributed enormously to MicSem over the years). 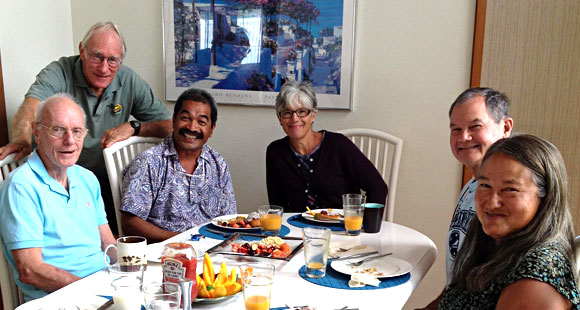 Then there was an early afternoon mass for the Chuukese living in Pahoa. Although you can?t seem him in this photo, Deacon Julio Akapito assisted at the mass and chaired the mwich that followed mass. 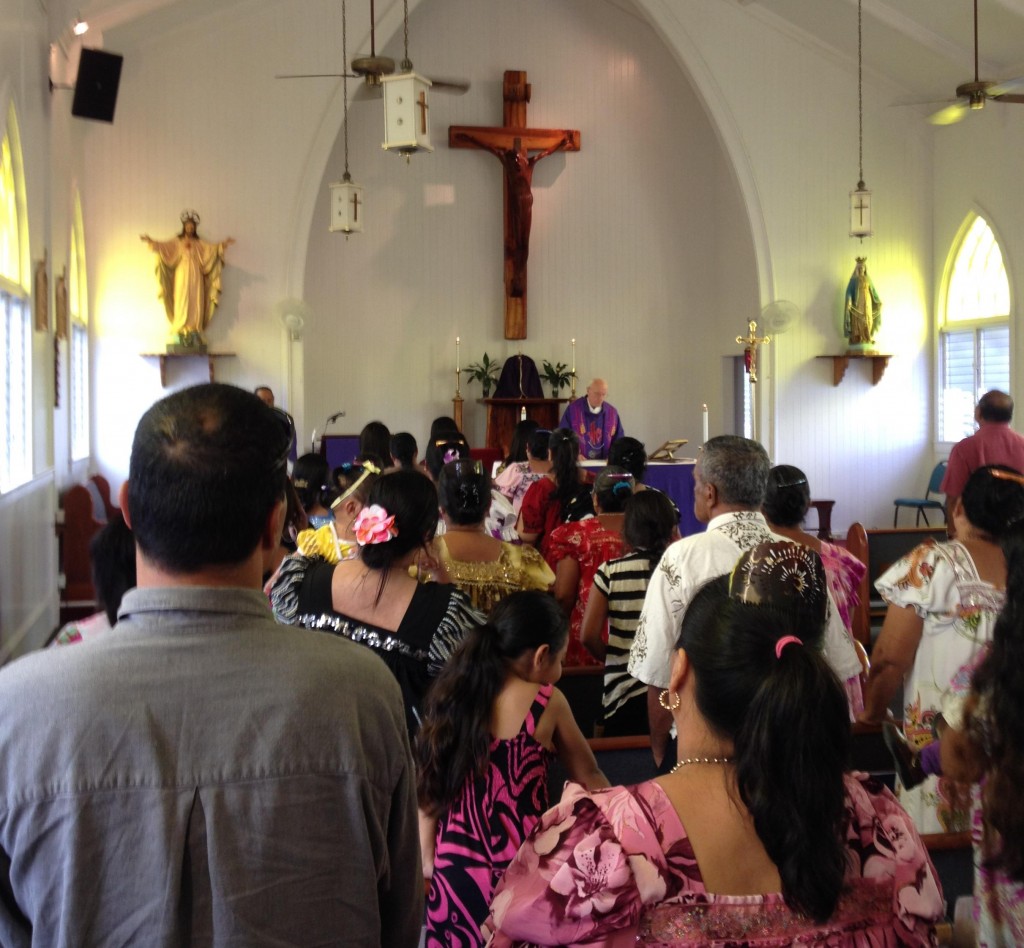 Mass for the Chuukese living in Pahoa.

That evening Vid and I spent time at Brooksie Goodard?s house for a relaxed social hour and dinner. Larry Goodard, Brooksie?s husband, was working in Palau at the time, but the guests included Peter and Barbara Black (Pete is an anthropologist with a life-long interest in Tobi) as well as John and Melanie Lee. 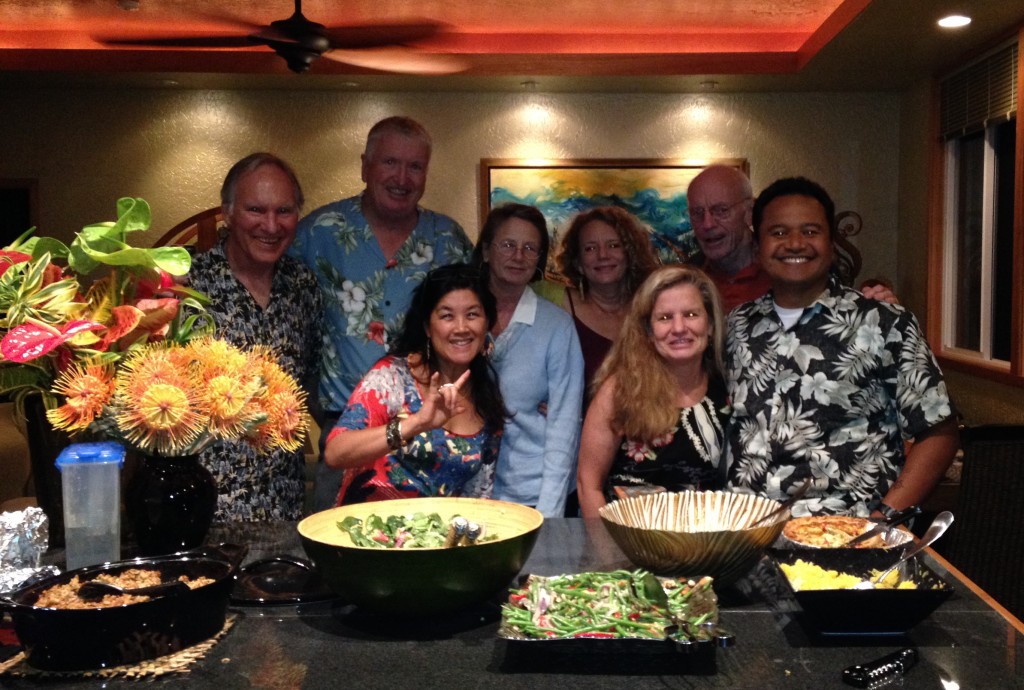 Two presentations at UH Hilo were scheduled for the middle of the week. Both were well attended with plenty of questions from the audience. The first talk showed what resulted when a culture stressed the social aspect of the person?s identity over the individual, as is the case in island societies. The results are what many people, even those clamoring for the importance of ohana (family) today. The second talk offered a view of woman?s role in the islands and how it has changed with modernization.

The photo below shows some of those who remained to talk afterwards: Craig Severance, anthropology teacher at Hilo who did research on Pis-Losap years ago, and Vid in the back, with Tulpe Day (from Kosrae but lived for years on Pohnpei) and Tom Raffipiy (Satawalese who served in the army for years and now is in the contracting business). 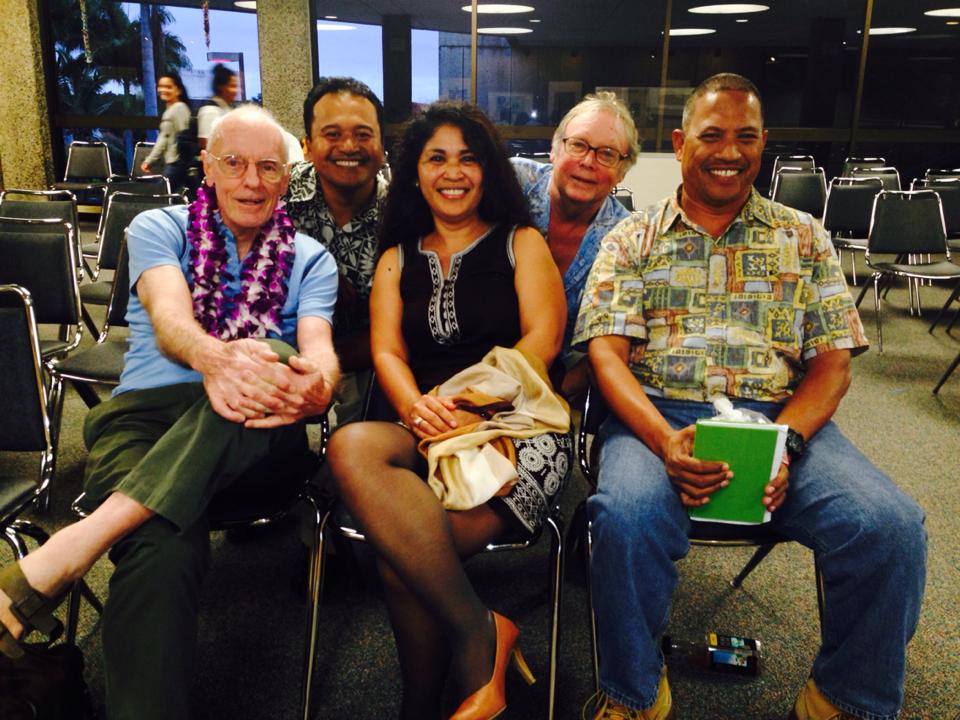 There was a gathering of Xavier alumni one evening with a potluck supper. You may recognize some of the recent grads below along with Andrew Polloi and Gilly from an earlier age. 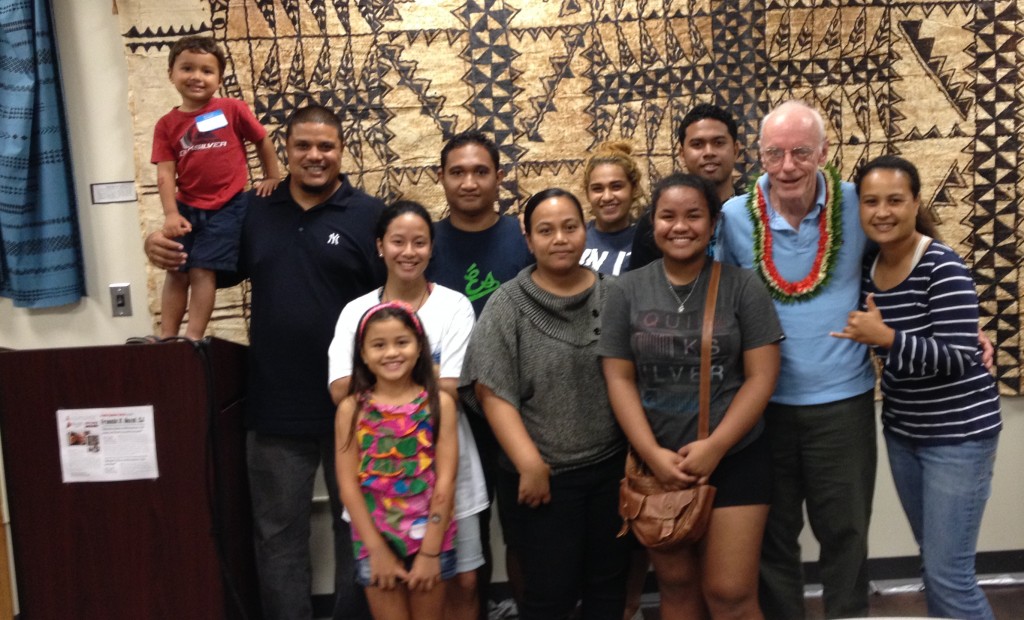 The week was full but not hectic. I had enough leisure to enjoy basketball again three afternoons during my time on the Big Island. (The white guy in the background looking on while everyone else is hustling for the rebound is me.) 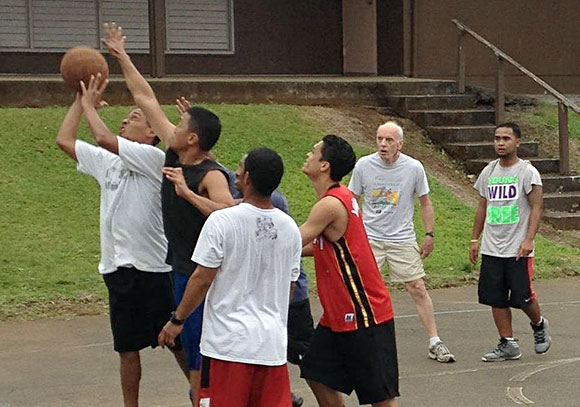 Basketball on the big island.

There was also time for a visit to Kona to spend time with Mike and Angie McCoy in the afternoon, and with Eric and Cris Lindborg in the evening. (Mike is still doing some consulting work in fisheries, while Angie is gardening on the plot next to their home. Cris and Eric worked for many years on Kwajalein, with Cris founding the Kwaj Cultural Center.)

Treats abounded: a surprise breakfast with Bishop Amando in Hilo, dinner with Taka Alphons, an old colleague at Xavier many years ago, along with Rose Marie Giasolli (another Kwaj veteran) and her friend, and a final wonderful day with Jason and his family. 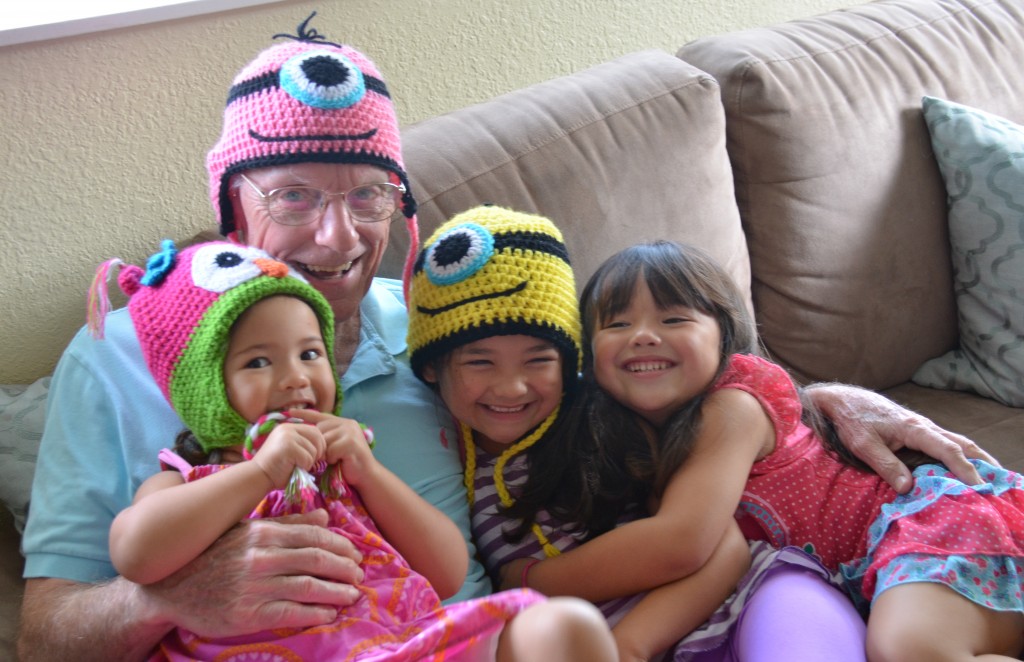 Having fun with Jason’s daughters: Leila, Stella and Harper. (Stella let me borrow her hat.)

Two Feast Days and Everything Between

A Warm Welcome to Milan